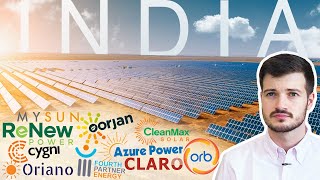 Solar power is an industry that is developing rapidly here in India. As of December 2019, the country’s solar capacity is at around 32 GW, and continues to rise due to the fact that India is the lowest-cost producer of solar power in the world! With this in mind, it’s no surprise that the solar energy space has begun to attract the interest of entrepreneurs who see the potential that this market has. 00:00

02:47 Orb Energy: Orb Energy was founded by Damian Miller and NP Ramesh in 2006, with its headquarter in Bengaluru. It provides affordable solar solutions to its customers, who primarily consist of small and medium enterprises, as well as low-income individuals. In October of 2019, Orb Energy raised an undisclosed amount of funds from Shell Ventures. In January 2018, they raised $15 million in a combination of debt and equity funding.

03:19 MYSUN: MYSUN is a Noida-based online rooftop solar startup which was founded by Gagan Vermani and Gyan Prakash Tiwari in 2015. It provides a platform to connect highly-rated solar installers to deliver high quality, fairly priced solar systems to its customers. In October 2016, MYSUN raised $2.5 million in series A funds led by early and growth stage investment firm General Catalyst.

03:46 Cygni Energy: Cygni Energy is a Hyderabad-based solar energy startup which was founded in 2015. It offers a novel solar DC solution to provide green solar energy and dc power at affordable costs to its customers. Cygni Energy last raised $6.4 million in a mix of equity and debt funding. The equity was led by venture capital firm Endiya Partners and the debt funding was led by Induslnd Bank.

04:47 Azure Power: Azure Power is a New Delhi-based clean energy startup which was founded by Inderpreet Wadhwa in 2008. Azure provides affordable and clean solar energy to its customers through utility-scale solar power projects. The cleantech startup claims to have more a 190 solar powered rooftops in their portfolio across 23 states in India. Azure Power last raised $75 million in a post-IPO equity funding from Caisse de Depot et Placement du Quebec in November 2019.

05:20 CleanMax Solar: CleanMax Solar is a Mumbai-based solar energy startup which was founded by Sushant Arora, Kuldeep Jain, and Andrew Hines in 2011. Cleanmax provides solar energy solutions for its clients, like rooftop solar panels in order to help them reduce energy costs, reduce carbon footprint, and achieve sustainability goals. According to CrunchBase, CleanMax last raised $38.6 millionp in a funding round from UK Climate Investments in April 2019.

05:50 ReNew Power: ReNew Power is a Gurugram-based cleantech startup ReNew Power was founded in 2015 by Sumant Sinha, a former investment banker. ReNew provides solar and wind energy solutions to boost the adoption of clean energy. In July of 2019, ReNew Power raised $300 million via rights issues from Goldman Sachs, Abu Dhabi Investment Authority and Canada Pension Plan Investment Board. So far, this clean energy startup has raised a total of $2.3 billion, according to CrunchBase.